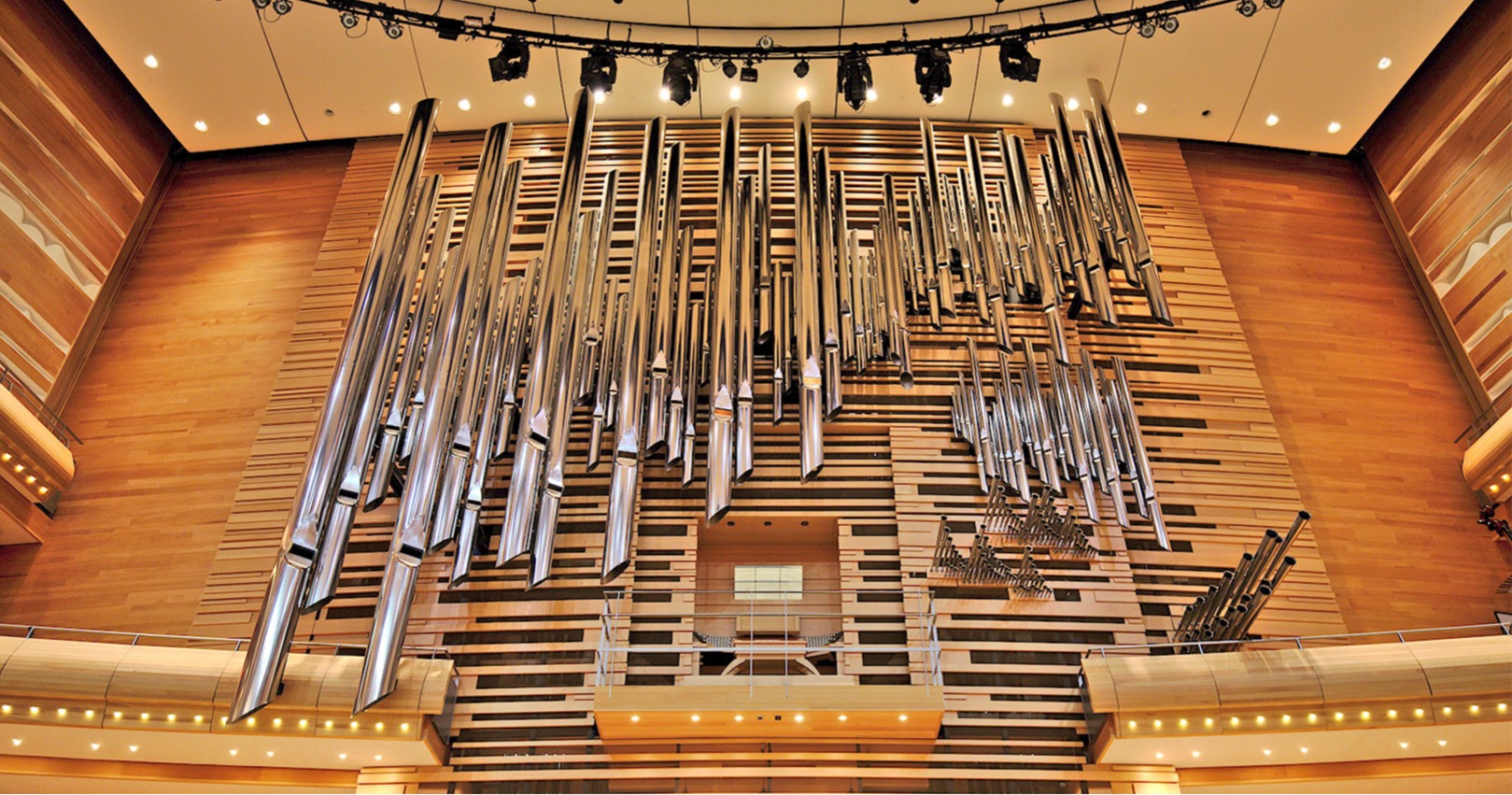 Montreal’s new concert hall had been a dream for many generations. Its conception has been carried out with the greatest care, providing a very successful venue for classical music. The hall is shaped like a “shoe box,” with acoustical adjustability as mastered by ARTEC acoustical consultants. It features many innovations, providing amazing clarity and remarkable sound projection without undue reverberation. Moveable canopies cover the entire ceiling of the hall, thus enabling to fine tune early reflection toward the audience. The interior walls of the hall are covered with layers of beech wood from the Gatineau region of Quebec, contributing to the overall acoustics and giving an airy Nordic elegance so appropriate for Quebec.

Designing a new pipe organ to be played with orchestra presents unique challenges in every project. Casavant’s expertise in designing and building pipe organs for concert halls places us in a select league in the world. In each situation, we conceive the organ for a concert hall to answer the expressed needs of sound fusion when performing with the orchestra and various ensembles, either as a soloist, an accompanying instrument, or as one of the instruments in the orchestra. In addition, the sound characteristics of the orchestra, along with the nature of the room and its acoustic, present interesting challenges in the planning of a concert instrument that will become a tonal and visual signature of the hall.

The organ at the Maison symphonique is an instrument designed along the French aesthetics, with 83 stops and 116 ranks of pipes. More specifically, eighteen eight-foot stops provide warm and clear foundation to match the wide dynamic range of a symphony orchestra, along with full principal and reed choruses in every division. The tonal scheme also includes remarkable flute choruses with harmonics of sevenths and ninths in the thirty-two-, sixteen- and eight-foot ranges, cornets of contrasting character, numerous color reed stops, and three en chamade trumpets, one being retractable, so it can be brought in and out the organ casework through a simple control in the console.

Four expressive enclosures, built with double walls providing a broad dynamic range and impressive sound effects, enable the organist to follow the orchestra nuances without changing registrations. In the expressive Grand Chœur division, nine stops are extended to the Pédale, and seven others are on higher wind pressure for specific tonal effect, such a French Horn and flue stops with harmonic scrolls (entailles de timbre), all adding to the versatility and registration possibilities of this large symphonic instrument.

The organ’s visual concept was developed collaboratively between Didier Grassin, then director of Casavant’s mechanical action workshop, and Diamond-Schmitt and Ædifica, architects. Speaking pipes from the thirty-two-, sixteen- and eight-foot principals installed in front of the wooden screen form a floating arc of elongated tubes, laid out in a dynamic ascending movement from left to right, a unique signature design rapidly adopted by the Orchestre symphonique de Montréal as its logo.

The organ is installed on four spacious levels, easily accessible through a beautiful wooden spiral staircase. The large bellows and wooden wind trunks assure very quiet winding when the organ is in use.

The organ is built with mechanical key and coupler action for the manuals and pedal. When coupled mechanically, the four manuals are perfectly manageable, with excellent touch and responsiveness. The (optional) electric assistance is available on couplers for the Positif, Récit and Grand Chœur divisions. The entire organ is equipped with a second, electro-pneumatic action when playing from the second console, which is movable on the stage.

Many novel features are manageable through an iPad and Wi-Fi communications, such as additive and substitutive Sostenuto, Pedal Divide adjustable on any selected note, soprano and pizzicato couplings, recorder & playback capabilities. The bank of registrations is managed through different files or accounts, to ease the use of the instrument as the available time in concert halls tends to be limited.

The organ at the Maison symphonique is one of our most significant achievements, both in terms of mechanical refinements, visual design, exquisite tones that truly blend with the instruments of the orchestra, and various sound balances. The parallel development of all these aspects has been key to the immense success of this instrument, which is now a landmark in our history.