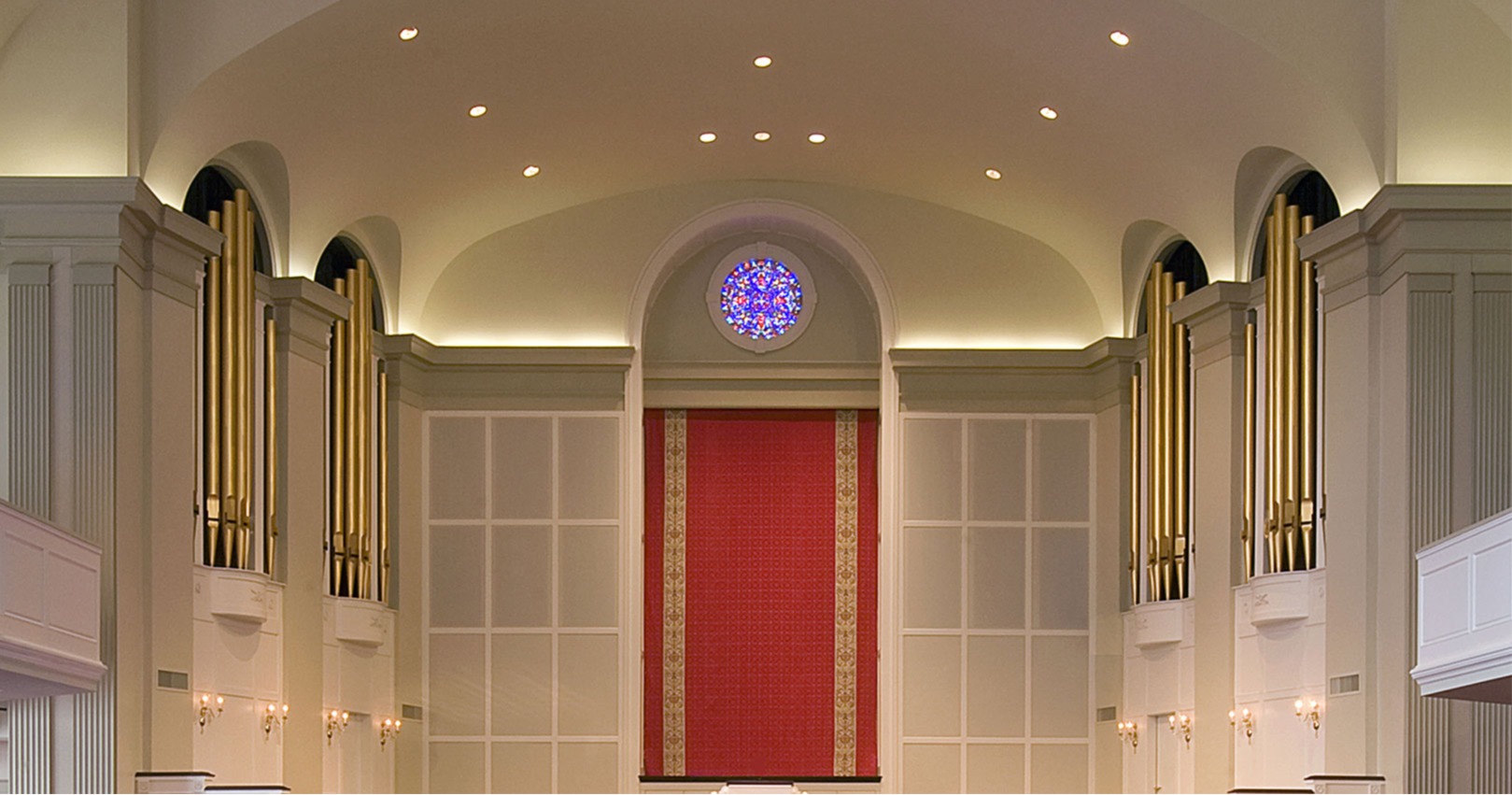 The new sanctuary of the First Presbyterian Church of Jackson, Mississippi, was completed in 2007. In their old downtown church, the congregation had installed a Pilcher organ in 1902. When they moved to the present location in 1951, a new Moller was installed shortly thereafter in 1952. In that historic spirit of continuity, pipes from the previous instrument were retained in the new organ, along with a number of stops made by the outstanding early 20th Century American builder, Ernest M. Skinner. Our voicers have carefully blended the old pipework with the new to create a beautiful and cohesive tone.

When Dr. William Wymond, Minister of Music and Worship, began to envision the new organ, he hoped to find some of the very special solo stop pipes made by Skinner to include in the organ. He inquired extensively through various means but could find none available. Quite unexpectedly, as he was in discussions with us, he discovered that Casavant was storing some of the very Skinner stops he was seeking. These stops belonged to a Toledo, Ohio, church that finally decided not to include them in their new Casavant organ. They agreed to sell these stops for the project. Dr. Wymond also secured other Skinner stops that were included in the new organ.

Interestingly, with regard to the tonal ensemble the organ reflects the sound of Casavant organs, and the solo stops sound like a Skinner organ.

The Great division, which is intended to lead congregational singing and to play the majestic anthems and postludes, is located behind the screened panels on either side of the dossal curtain. Its stops are bold in voicing. Almost all the pipes of this division are new, with the exception of the twelve lowest pipes of the Trombone 16’ retained from the 1952 Möller organ. The new Harmonic Flute 8’ is patterned after those of the famous 19th Century French builder, Cavaillé-Coll. The reeds are English in character.

The Swell, which is particularly flexible and is valuable both for accompanying and for hymn playing, is located behind the front arch on the left side of the choir loft. Because the chorus reeds are French, the whole division takes on a more brilliant character. Other noteworthy stops include the new French-style Salicional 8’ and Voix Celeste 8’. Heritage Casavant Flute Triangulaire 4’ and Vox Humana 8’ were reused also. The new Skinner-style Corno d’Amore 8’ has a hauntingly beautiful sound.

The Choir, which is located in the chamber behind the back arch on the right side of the choir loft, has stops that are especially suited to accompaniment. It also features enough bolder stops to stand alone even in accompanying congregational singing. This division includes a number of fine stops retained from the previous instrument.

The Solo, which has stops that are used to play solo melodies, is located behind the front arch on the right side of the choir loft. Of particular interest are the original and historical Skinner stops bought from the Toledo church. These include a 1909 Harmonic Tuba 8’ (the most powerful trumpet stop on the organ) and 1916 Gamba 8’ and Gamba Celeste 8’, which are very broad and large-scaled strings that flair out toward the top of the pipes. Other unique stops are the new Corno di Bassetto 8’, which is a large-scaled Clarinet with bells, and the vintage Casavant Orchestral Oboe 8’, a stop made to sound particularly like oboes found in symphony orchestras. Rare is the Heckelphone 8’, a stop found on only about ten organs in the USA. Developed by Skinner, this stop imitates its orchestral counterpart, actually an alto English Horn, with a dark, piquant tone. The stop was crafted by David and Chris Broome, with the kind assistance of Nicolas Thompson-Allen and Joseph Dzeda, the curators of the magnificent Skinner organ located in Woolsey Hall at Yale University in New Haven, Connecticut, who generously lent pipes for the heckelphone stop of that organ so the Broomes could get the pipes just right.

The Pedal is located behind the back arch on the left side of the choir loft. The bulk of these pipes were carried over from the former organ.

The Echo, which contains only three stops, is located in a chamber in the tower of the church and speaks into the rear balcony through openings in the south wall. The manual stops are both vintage Skinner pipes from the Toledo church. They are both described by Skinner as the most beautiful of all organ stops. The 1916 Klein Erzähler 8’ is a very soft and gentle stop. The 1909 Spitzflute Celeste 8’ is the first-ever example of this stop combination made by Skinner. It is also a very gentle, dreamy-sounding stop, and is perfectly suited to play quiet interludes or background music for communion services as is its principal intent. The Pedal Bourdon 16’ came from the 1902 Pilcher organ.

E. M. Skinner had a keen ear for beautiful tone. He knew organ pipes thoroughly and had the ability to create new organ stops of exquisite tonal color. His solo organ stops, those that imitate the English Horn, Orchestral Oboe, French Horn, Basset Horn and Heckelphone, are highly prized to this day. His quiet, heavenly-sounding soft stops, such as the Spitzflute Celeste the Klein Erzähler, are considered to be unrivaled for their beauty.