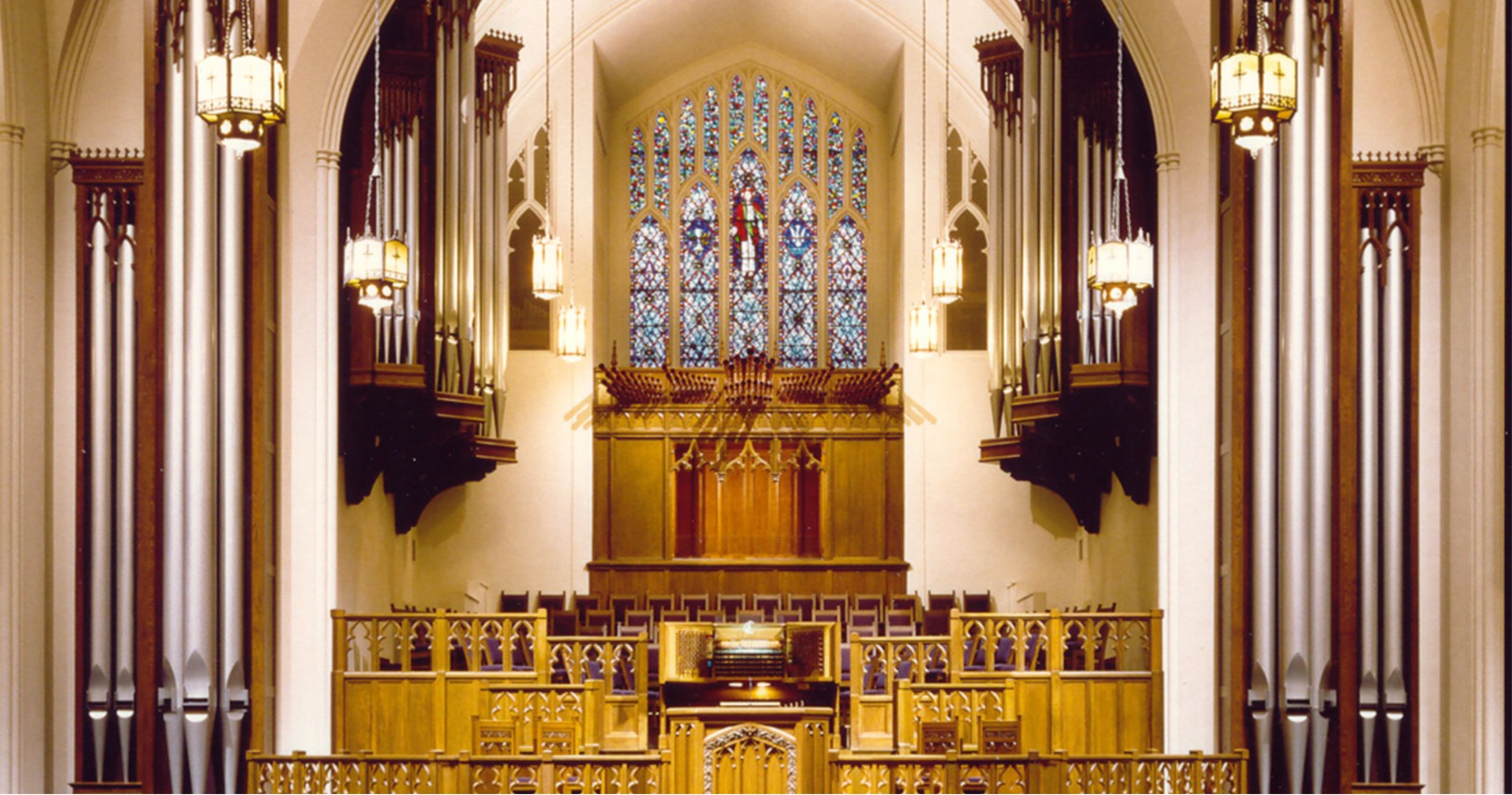 A Pinnacle in the Art of Organ Building!

In the words of Frederick Swann, consultant on the project, “this instrument sustained one of the longest gestation periods in history!” The project, which was developed over a period of twelve years before reaching a contract, reflects the extraordinary creative collaboration between Casavant, consultant Fred Swann, director of music Thomas Stoker and organist Albert Travis. Once completed, Thomas Stoker described the organ in these terms: “In its beauty of architectural and tonal design, it far surpasses our hopes and dreams. It is an instrument that should serve this congregation ably into the future. And it should serve to inspire organists and listeners alike.”

This instrument is Casavant’s magnum opus, with 129 independent stops on nine manual divisions and pedal, divided between a 105-stop chancel organ installed in new cantilevered cases and the existing organ chambers, and a very effective 24-stop antiphonal organ, for a total of 10,615 pipes. The spacious Gothic building, which reaches a height of 80 feet in the nave, provides an excellent acoustical setting for a musical instrument of this magnitude.

The vision for the birthing of this uniquely grand project was inspired by church member and concert pianist, Van Cliburn, who asked that question: “Why don’t we look at the most able uses of the instrument and make the instrument the greatest gift that we might give to God?” In other words, it takes only a little extra effort to go beyond what is merely expected to what is the best.

The instrument, which was our 3750th new organ commission since 1879, was named for Broadway member and Mr. Cliburn’s mother, Rildia Bee O’Bryan Cliburn. The organ was dedicated in a five-day celebration in October 1996. The project also included a major sanctuary renovation.

Throughout the planning phases of this project, the goal was never to create a large instrument just for its size. In fact, it was only at the end of the process that someone raised the question about the instrument’s size in relationship to other installations. Jean-Louis Coignet, Casavant’s Tonal Director at the time, described his approach to the tonal design of the instrument as follows:

To some extent, it is easier to design a large organ than a small one, since one does not have to discard some fine but nonessential voices. But this facility also hides the dangers of redundancy and lack of personality. It is too easy to give birth to an enormous collection of characterless stops. This is a shortcoming I wanted to avoid in Casavant’s Opus 3750. My goal was not to generate enormous power, thanks to the great number of stops, but rather to realize a very rich palette of sounds that would be both individually seductive and eminently able to blend together.

In every case, the choice of stops was guided by the overall tonal architectural design plus optimal placement for tonal egress and service. Not only does this organ have extremely wide dynamics, but it also displays an exceptional variety of colors and timbres. Consultant Frederick Swann expressed his appreciation as follows:

I can best sum up the result by saying that I believe this magnum opus of Casavant Frères to be the art of organ building brought to its pinnacle. No effort has been spared by Casavant or by the church to ensure that this instrument would be a work of art par excellence. Having played hundreds of organs in many parts of the world, I can honestly say that Opus 3750 has few peers. It is supremely satisfying to play, to listen to, and to look at.