Kauffman Center
for the Performing Arts 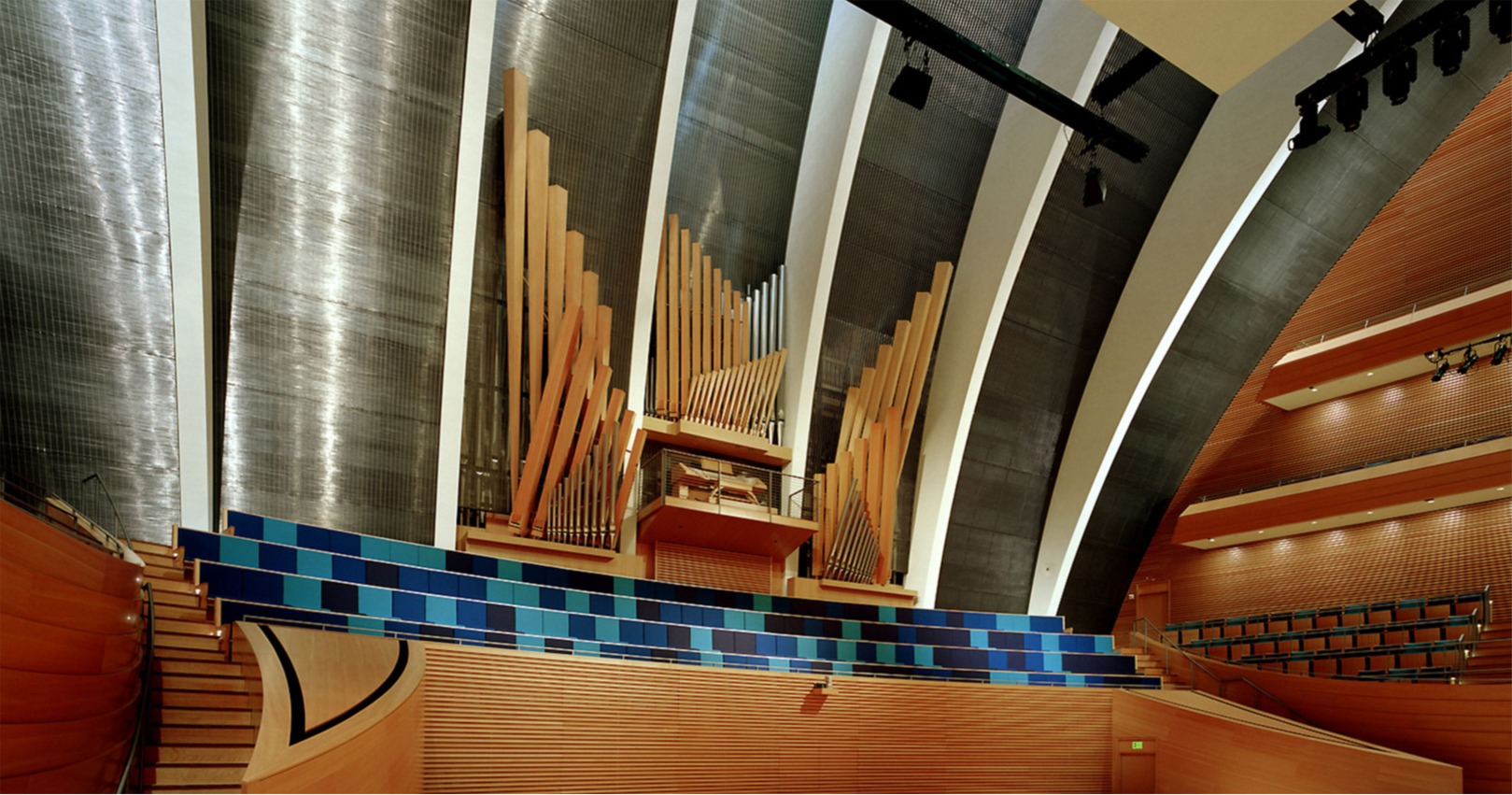 As early as 1995, civic leader and philanthropist, Muriel McBrien Kauffman, discussed her vision for the Kauffman Center for the Performing Arts with her family and the community. After her death, her daughter and the chairwoman of the Muriel McBrien Kauffman Foundation, Julia Irene Kauffman, helped make this vision become a reality. In 1999, formal planning for the center began when the board started to interview architects. Internationally renowned architect Moshe Safdie was selected, along with his partners for the project, theater designer Richard Pilbrow and acoustician Yasu Toyota. After several phases of design and fund raising, ground was broken in October 2006. Five years later, the Kauffman Center for the Performing Arts was opened officially, on September 16-17, 2011.

Designing a monumental pipe organ for a new concert hall is always an engaging and exciting opportunity. In the Kauffman Center project, we had the privilege to work with a team of visionary and dedicated people who were aiming for the very best. In that regard, Julia Kauffman’s determination to see a pipe organ in Helzberg Hall has to be saluted.

The new Casavant organ is the visual centerpiece of Helzberg Hall. Moshe Safdie had a strong influence on the organ façade design, which was developed collaboratively with Didier Grassin, then director of Casavant’s mechanical action workshop, over a period of some two years. The visible wood pipes, made of Douglas fir, from the Pédale Contrebasse 16’, Violonbasse 16’ and Contre Bombarde 32’, and polished tin pipes from the Grand Orgue Montre 16’ and Pédale Montre 16’ are inclined as much as 10 degrees sideways and 16 degrees forward. Because of its singular design, the organ façade becomes the immediately recognizable signature of the hall.

Yasu Toyota created an acoustical environment that favors clarity of sound throughout the hall. Thanks to the acoustical qualities of the hall, we approached pipe scaling, voicing and tonal finishing in the hall to create a naturally singing sound that achieves both exquisite tone color and the required power to fill the hall in solo and orchestral capacities.

The organ has 79 independent stop, 102 ranks of pipes over four manuals and pedal. Its tonal design was freely inspired by the large French symphonic organs of the late nineteenth century. Three of the four manual divisions are enclosed to achieve maximal dynamic range: Récit, Positif, and Grand Chœur.

In order to achieve optimal tonal cohesion, the organ’s layout is classical in essence, with the manual divisions located one above the other, and the Pédale division divided C/C# on either side of the manual divisions. The Positif is located at the lower level, as close as possible to the choristers. The Grand Orgue, expressive Grand Chœur and main Pédale are at the center level to optimize the interaction with the orchestra. As the console is located immediately under these divisions, the organist has an excellent sense of balance, considering the size of the instrument. The Récit is located at the upper level to color and complement the other divisions. The large Pédale stops are located against the back wall of the organ space. This disciplined layout contributes greatly to define the balance of the different divisions with each other. Consequently, the organ plays its musical role very effectively either with the orchestra, with choirs or as a soloist.

As expected in any organ that size, principal choruses are found on the main manual divisions. The Grand Orgue principal chorus is echoed by that of the Positif. In the Récit, the French inspired Plein Jeu Harmonique, a harmonic progression, caps the full swell sound. To reinforce bass tone in the Pédale, we elected to have independent mutations at 10 2/3’, 6 2/5’ and 4 4/7’ pitches, instead of a traditional mixture; in this large hall, these have proved to be a fitting choice.

The organ features a wide variety of flute stops of contrasting character. Harmonic flutes of different timbre and volume are found in the three expressive divisions. Each of the four manual divisions includes a complete Cornet, including an eight-rank, sixteen-foot cornet décomposé in the Grand Chœur, and a cornet of harmonic flutes in the Récit.

Complete reed choruses are available on all manual and pedal divisions, plus a number of color reed stops for solos and tonal effects.

More importantly, all the stops blend together to create an unlimited number of registrations and to build an impressive, seamless crescendo from the whispering Voix Angélique under expression to the thunderous Tutti.

The organ is built with mechanical key and coupler action for the manuals and the pedal. In an instrument that size, the challenge of designing and making a mechanical action that remains light and responsive when playing with many stops and couplers was real. In the early 2000s, our team reengineered our mechanical action to achieve the best playing action possible. As part of that process, we made use of our long experience building electro-pneumatic mechanisms to develop an ingenious system that enables playing the organ with an independent electro-pneumatic action that does not alter the crispness of the mechanical action. This system, which is extremely responsive and allows controlling the pallet release, has proved to be the best solution for mechanical organs requiring dual action for the use of selective electric couplers or a moveable console on the stage.

Designing and building pipe organs for concert halls always presents interesting challenges that test one’s ingenuity. To be able to find creative solutions that go beyond initial expectations is most rewarding. This is what all of us at Casavant have experienced with the Kauffman Center project. Tonally, the organ is especially elegant, and we are pleased that it blends so admirably with the sound of the orchestra. Also, the degree of refinement achieved with the mechanical action makes this instrument a joy to play.