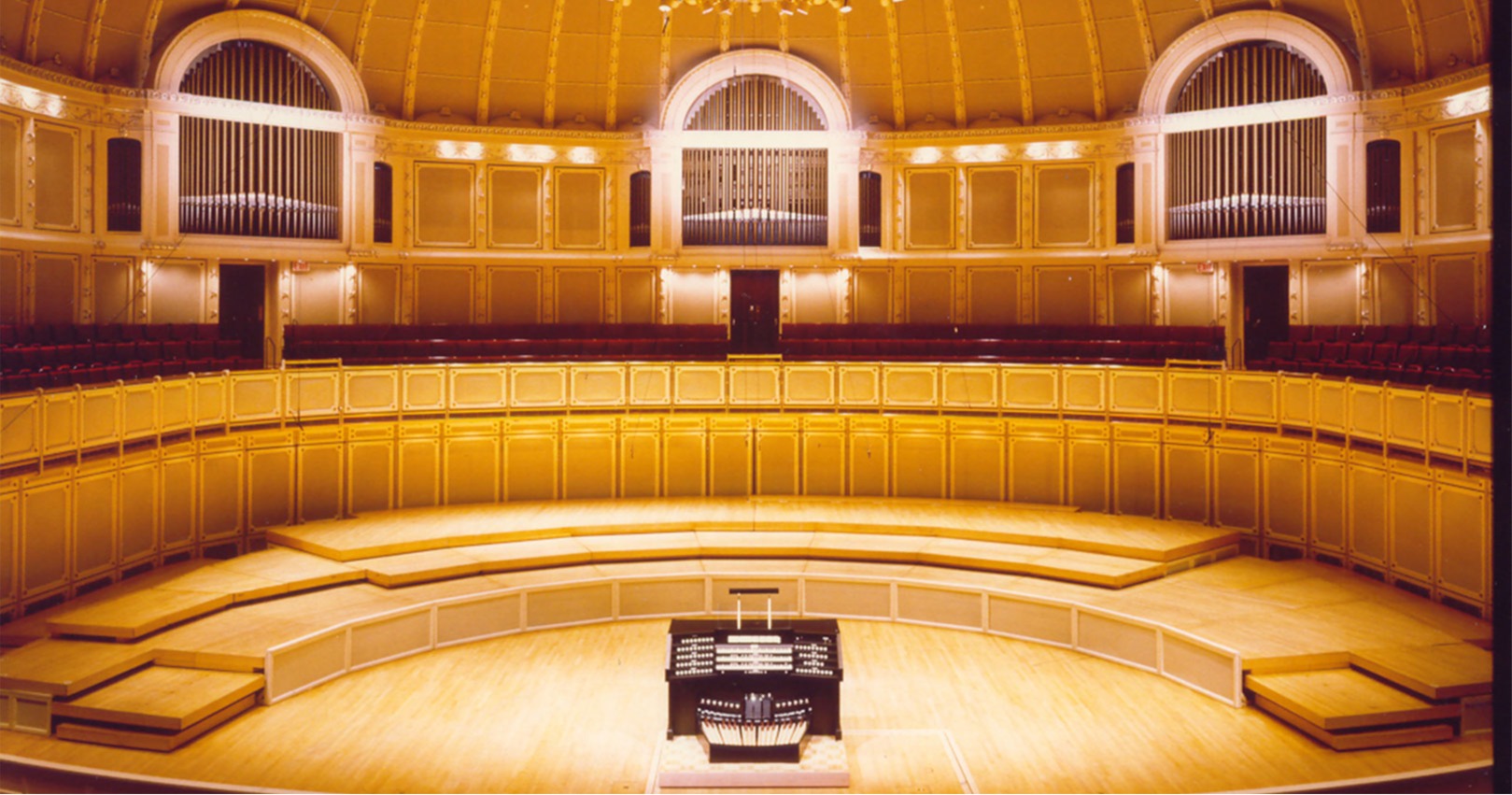 A Heroic Organ for a Powerful Orchestra!

One of the best-known concert venues in the United States, this Orchestra Hall was specifically designed as a home for the world-renowned Chicago Symphony Orchestra. Inaugurated in 1904, it contained a four-manual Lyon & Healy organ that was removed in 1966 during a renovation of the hall. In 1981, a three-manual, 74-rank Möller organ was installed in the existing organ chamber.

The installation of the Casavant organ was the culmination of a major architectural and acoustical renovation of Orchestra Hall, described as follows by acoustician Dawn Schuette:

The renovation of Orchestra Hall focused on many major areas, including isolation of noise from mechanical systems and from the exterior, as well as the addition of needed breathing room for the symphony; but the primary changes centered around increasing reverberation time in the hall, providing good bass response, providing a good listening environment for musicians, and improving overall sound for patrons, particularly on the main floor.

To increase reverberation time, the original roof was removed and a new, higher ceiling was installed above the acoustically transparent visual ceiling within the hall. This increase was most significant over the stage, where the new acoustic ceiling height was increased by roughly 25 feet.

In conjunction with the increase in overall volume in the hall, the ceiling over the stage was changed from solid to acoustically transparent to allow an easy flow of sound energy from the stage into the new, expanded attic space. This change also benefited the organ by allowing the instrument to be located within the upstage area without being separated into individual chambers [like the previous instrument]. The organ now speaks directly into the room, both toward the stage and audience and into the upper volume, to fill the room with sound in a way that was not possible in the previous configuration.

The desired tonal effect of an organ appropriate for use with the Chicago Symphony Orchestra was determined to be one that would recreate the effect of older instruments with their depth and warmth of sound in the mid, low, and sub octave ranges. The main purpose of the new instrument was defined as being for the performance of the orchestral literature that includes the organ as an orchestral instrument, as well as those works with a more prominent solo role. Interestingly, the concept of using the organ for solo recitals was not a major criterion. In order to fashion the new facades in the style of the first instrument, we researched various archives for photographs of the 1904 organ.

Thirty-seven ranks from the 1981 Möller were retained, rescaled, carefully revoiced, and integrated in the new tonal scheme. Jean-Louis Coignet, then Casavant’s Tonal Director, describes the new organ as follows:

We provided the new instrument with a greater variety of foundation stops voiced more boldly, with mixtures designed along symphonic lines (the Choir and Swell mixtures are progressions harmoniques in the French symphonic tradition). The Great was fitted with a new Diapason Chorus and a new Harmonic Flute 8’; a bright assertive Trumpet 8’ was added to the revoiced Double Trumpet 16’. The Great and Choir were voiced on six inches of wind pressure, the Swell on six inches except for the three chorus reeds, which were voiced on ten inches. A new Tuba 8’, on 25 inches of wind pressure, was added to the Choir, extended full-length to 16’, and made available at 16’, 8’, and 4’ pitches on the Great. A new Viola Pomposa 8’ and Viola Celeste 8’ were installed in the Choir, and the existing Salicional 8’ and Voix Celeste 8’ were reworked to make them more string-like. A wooden Contrebasse 16’ of huge scale was added to the Pedal, the flues of the division were voiced on six inches and its reeds on ten inches. Such wind pressures were necessary in order to make the organ powerful enough to fill this huge acoustic space of more than one million cubic feet.

The organ was designed in close collaboration with consultant Jeff Weiler, who remains the organ curator of the Orchestra Hall organ. Mr. Weiler’s fondness for older Casavant organs is reflected in the design of the instrument.

Many of the organ’s most interesting tonal details are inspired by Casavant organs of the 1920s and 1930s. The instrument contains a very large Contrabass 16’ (open wood), and Tuba Mirabilis 8’ on 25 inches of wind pressure, and a charming capped Clarinet much like those produced under Stephen Stoot’s tonal directorship. Portions of the wind system would likewise seem familiar to one acquainted with earlier Casavant instruments. The Swell and Choir divisions are fed from very large reservoirs and have traditional pneumatic tremulants. The terraced drawknob console is compact and moveable, and its low-profile design allows for excellent visual communication between conductor and performer.